OpenFMB Adapter Configuration Tool (OACT) is a desktop application used to generate Adapter configuration files (in YAML format), which direct how the Adapter behaves at runtime and detail the mappings between legacy protocols to OpenFMB profile messages.

Protocol Plug-in Configuration and its Sessions​

A protocol plug-in (DNP3 master/outstation, MODBUS master/outstation, GOOSE pub/sub) can have one or more sessions associated with it. A session represents an interactive data interchange between the Adapter and the connecting device. 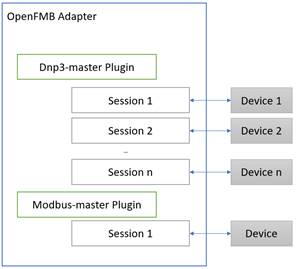 A session configuration is usually referenced to a profile mapping file. The profile mapping files are also known as the *template files*. A template file intends to be re-used and shared among sessions that speaks the same protocol to the same device types. For example, a dnp3-master template file (for example, SEL-651R-template.yaml) developed for SEL-651R (a Recloser Control device) can be reused with any dnp3-master sessions that want to talk to a SEL-651R device. In YAML file, it is depicted as follows: